Review of Star of Persia by Jill Eileen Smith 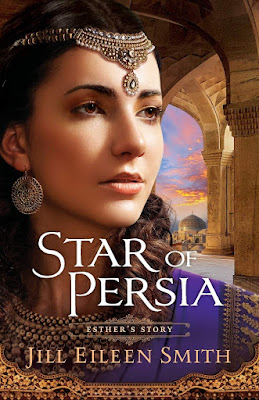 Love. Duty. Fear. Courage. In the court of the king, which will prevail?

In an effort to complete a war his father had planned to win, King Xerxes calls every governor, satrap, and official in his vast kingdom to his palace in Susa to strategize and feast. When they finally leave, he decides on one more week of frivolity, which ends in the banishment of his favorite wife, something he never intended to do. But when he discovers Esther, Xerxes is sure he has a second chance at happiness.

In her wildest dreams, Esther could never have imagined that she would end up as queen of Persia. Yet she knows better than to become complacent. Another of Xerxes' wives is vying for position, and his closest advisor has a deep and dangerous grudge against Esther's adoptive father. Caught in the middle of palace politics, Esther will find herself in an impossible position: risk her life or consign her people to annihilation.

For more information about Jill Eileen Smith and her books, check out her website here!

Biblical Fiction is such a wonderful medium to better understand the pains, heartaches, betrayals, and struggles of our heroes of faith! Star of Persia: Esther's Story by Jill Eileen Smith is another unique look at what Esther's life and struggles may have looked like --  and it's definitely worth reading!

I was truly impressed with the way the author was able to breath life into this account that's been read and told many times. While the author gives readers hope for Esther's happiness, the unsavory and heartbreaking realities of Esther's life are not idealized as a fairytale. The addition of certain historical details gives fresh insight into the Biblical account, adding unique significance to some of the key moments and choices of Esther's life. At it's core, Esther's stand and testimony -- the story we know by heart -- remains unchanged, but there are still fresh lessons to be learned, revelations to be hand, and stands of faith to be made!

Ultimately, the character development -- especially for the people who weren't Esther -- is what impressed me the most in Star of Persia! The addition of Amestris (one of Xerxes' wives) added a powerful thread to the palace politics that could have been (and history shows they often were) at play. Mordecai was humanized, becoming a man who made fearful mistakes and also had to take a stand of faith. Xerxes was developed past his womanizing ways and intense rages, showing readers a broken man who you desperately hoped would do the right thing. And the best part is that this complex cast of characters shows just how much God's hand was at work!

Four Stars ~ Star of Persia: Esther's Story by Jill Eileen Smith blends fact and fiction with a call for action, faith, and courage. Star of Persia is a standalone, but the author has many other wonderful titles in her backlist for readers to enjoy!

V. Joy Palmer loves to write romantic and comedic stories that proclaim God’s deep love for us. She’s a member of American Christian Fiction Writers and an avid blogger. In her spare time, Joy loves to sing (especially Disney songs), drink large quantities of coffee, and take flowery photos for Bookstagram. When Joy isn’t fighting with fictional people, she’s hanging out with her husband and their adorable little girl. Connect with Joy via www.vjoypalmer.com!