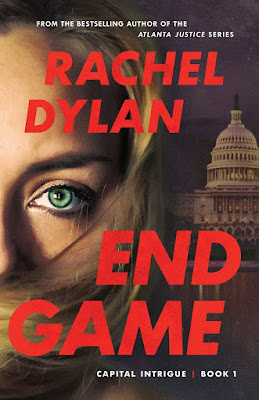 Each New Clue...
Every Crime Scene...
Brings Them Closer to Discovering the End Game

When elite members of the military are murdered on the streets of Washington, DC, FBI Special Agent Bailey Ryan and NCIS Special Agent Marco Agostini must work together to bring the perpetrator to justice. Unfortunately, all evidence points to a Navy SEAL sniper who Baily refuses to believe is guilty.

When Bailey and Marco start to connect the dots between the victims, they wonder if there's a deeper cover-up at play. After Bailey is targeted, it becomes clear that someone is willing to kill to keep their dark secrets.

With the stakes getting higher by the moment, Bailey and Marco rush against the clock to determine whom they can really trust in this twisted conspiracy. As allies turn to enemies, the biggest secret yet to be uncovered could be the end of them all.

For more information about Rachel Dylan and her books, check out her website here!

Romantic Suspense Fans, if you've been craving the bookish mashup of NCIS, JAG, and your personal favorite FBI drama, then End Game by Rachel Dylan will be the love of your bookish life!

I found End Game to be a plot-driven, whodunit story. The author did a really good job portraying the investigative nature of the various agencies featured in End Game. I was impressed by how realistic this aspect was, and the inclusion of multiple perspectives really helped with that! This aspect of the story means that readers learn some of the information and twists as it's being reported to the main characters.

While the characters weren't soulmate characters for me, the multiple perspectives provide a plethora of relatable, real-life issues! For instance, as the attraction between Bailey and Marco develops into the potential for something more, Bailey has to confront her fear of loss before she can open her heart to something new with Marco. Izzy, the rookie NCIS agent, finds God as she struggles with moving past a trauma (this trauma could be triggering, but it was delicately handled). Additionally, NCIS Special Agent Marco Agostini is the bookish equivalent of NCIS ' Special Agent Anthony DiNozzo -- swoon, LOL!

Three Stars ~ End Game by Rachel Dylan is an intriguing start to what is sure to be an intriguing series! End Game is the first book in the author's new Capital Intrigue Series from Bethany House.

V. Joy Palmer is the author of Love, Lace, and Minor Alterations and Weddings, Willows, and Revised Expectations, and she is a member of American Christian Fiction Writers. She is also an avid blogger and co-founder of Snack Time Devotions. In her spare time, Joy is an unprofessional chocolate connoisseur/binger, and she loves acting crazy and drinking coffee with the teens she mentors. When Joy isn’t urging the elves that live in her computer to write, she’s hanging out with her husband, their adorable baby girl, and their socially awkward pets.